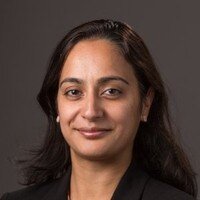 Dr. Jaspreet Loyal is a pediatric hospitalist and an associate professor in the department of pediatrics at Yale School of Medicine. From 2012 to 2017, she served as the medical director for the Well Newborn Unit at Yale New Haven Children’s Hospital. In 2017, she became the medical director for the inpatient pediatric units where she provides clinical oversight, and leads development, implementation and monitoring of programmatic initiatives including quality and safety, the safe flow of patients, and patient experience. In 2016, Loyal joined the Yale pediatric residency leadership team as an associate program director. Loyal received an undergraduate degree from St. Catherine’s University in Minnesota, a graduate degree in Epidemiology at Stanford University in California, and a medical degree from the Medical College of Wisconsin. Prior to joining Yale, she was a resident and chief resident in pediatrics at Weill Cornell-New York Presbyterian.